What was it like working at a brickyard in the past and what tools and methods were used? We will give you an interesting insight into that at this museum. Nowhere else in Sweden can you find such a well preserved industrial area with buildings and objects.

Bricks have played an important historical role in the Swedish society as building material, roof covering and not least to drain arable land (tile pipes).

The manufacturing in Almvik started in the beginning of the 17th century and continued until the factory was closed down in 1971. The works and the old industrial area are classified as national heritage.

The best way to experience the museum is by taking a guided tour through the premises where an accomplished guide will explain the steps and the machinery in the manfacturing process. You can also watch a short documentary in the museum's cinema. If you prefer to explore the museum on your own, feel free to do so.

The museum is beautifully located on the shores of the Gamleby fiord. Several buildings are located on the area, e.g. the big drying shed, the ring oven, a flour-mill, saw-mill and carpentry.

On the large lawns you can let your children play or enjoy your own picnic overlooking the bay. On a hot day, why not visit the public bathing place a few hundred meters away via a foot path? There you will find a sandy beach, a jetty, a children's playground and a toilet.

In the museum we have an assortment of ice-cream and picture postcards.

We might be able to make an exception for groups. See telephone numbers below.

Almvik is located half-way between Gamleby and Västervik along road E22. Take the exit at a big red house with “ALMVIKS CAFÈ” in big letters and park there. Cross the railway (carefully) and walk a few hundred meters towards the bay and the musem. Follow the sign-posts.

Bus 23 and 25 from Västervik halt next to the museum. 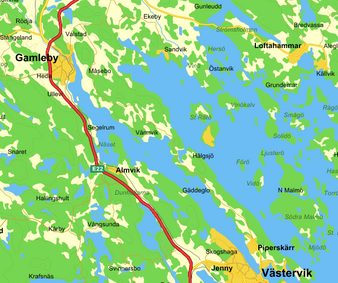 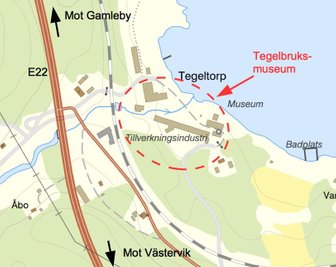 Almvik village is located in the north east corner of Småland county near Västervik town. It is a pretty area often called "Tjust". The old industrial environment with a flour-mill, saw-mill och brick-works is nowadays an interesting museum.

At the turn of the century (1900) the village had a railway station, telegraph station and a harbour that shipped bricks and lumber to places along the coast. Large volumes where sold to Stockholm. The boat traffic on the in the bays was quite intensive in thos daysbetween Västervik and Gamleby.

The brick-works, the mills, the carpentry and the country-shop provided work for the people in the Almvik village half a mile away.

The flour-mill was closed down 40 years ago but is now in working condition.  Today the mill houses an interior decoration shop, open in the summer months.

The country shop has been turned into a popular coffe-house serving for example home made ice cream and pizzas. Most of the amenities in the village have closed down. There used to be  three farms, a school, a shop, a cinema and a temperance house.

The clays was taken from near the bay, just north of the brick-works.During 1898 a small railway was built for the transportation of the clay, upon which the carriages at first were pushed manually. Later oxen and horses were used.

In the late twenties they were forced to search for a new source of clay. It was found close to the lake Bleken on the other side of the main road. As it was at a longer distance from the brick-works the transportation was arranged by means of a steam powered cable way. The brick works was powered by the water in the brook from lake Bleken until about 1943, when electric power was installed.

The production continued in the same way, with much manual labour and simple tools, until the closing down of the brick-works 1971.

In the year 1669 about 4000 bricks were supplied  to the repair of Stegeholms Castle (today a ruin in Västervik where an annual song festival, well known nation-wide, is held). In 1885 the brick master mentioned in a letter that 560 000 bricks, roofing tiles andtile pipes have been produced. In 1928 the production reached 1.4 million units.

The area, with its many buildings, belonged to the Blekhem Egendom, an estate that has been owned by the Nordenfalk family since 1837.

The history of Blekhem dates back to the 14th century and the most important owners are, in chronological order, the Soop family, king Gustav Wasa, king Gustav II Adolf,  and the families J Skytte, Gyllenstierna, Posse, Lagercrantz, Lewenhaupt and Hamilton. 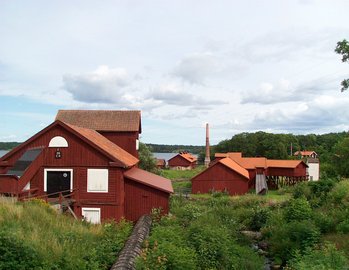 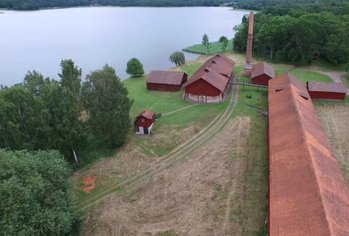 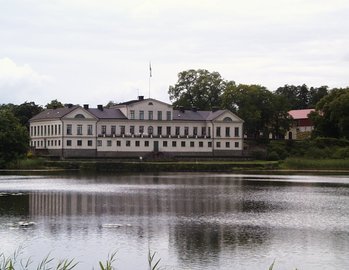